10 Extreme Sports You Won’t Get Life Insurance For

That’s why, when you complete your life insurance application, the questionnaire includes a certain question. It asks: “Do you participate in any dangerous pastimes?” or similar.

That doesn’t stop the young and courageous – who hopefully do not have any dependants – from seeking an adrenaline rush from extreme sports.

We are not talking top level sport here. We are talking about extreme sports that are too extreme to appear on TV a 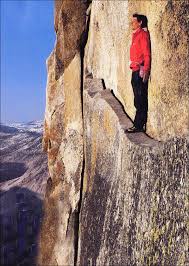 nd too extreme for them to be competitive sports.

When extreme sportsmen play sport they are not looking to win a trophy or a medal or a championship or national honours.

They do their sport so they can stare death in the face and hopefully get out alive and full of adrenalin. Life insurance companies know this well.

There are many extreme sports – the list grows daily – but here are ten hair-raising sports that will send life insurers running for the tree line: 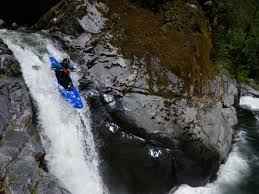 White water kayaking is now old school. The latest craze, thanks to the technical developments of kayaks themselves, is creeking, where participants paddle deliberately down waterfalls.

While paddlers attempt to land safely in the water below following a stomach-churning plunge, there is always the chance of crashing into rocks just below the surface or simply being sucked into a whirlpool once the kayak has landed. 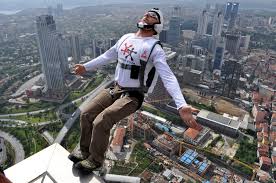 This sport was invented by young folk in response to the parental jibe: “So if your friends jumped off a cliff would you jump off a cliff too?” Now young adults can respond by saying, “Actually, yes”.

BASE jumping is a really worthwhile sport as extreme sports go. It has the proud record of being the most dangerous sport in the world. Participants have the pleasure of knowing that they have a one in 2,317 chance of dying when they jump off “building, antenna, span or bridge, earth or cliffs”.

It’s like sky diving in that you have a parachute but you have really little time to deploy the parachute. If the chute fails, you have a zero chance of survival. 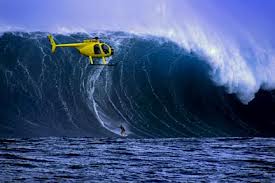 As if riding giant waves was not enough, daring surfers decided that missing out on skyscraper-height waves was a crying shame. The question was ow to get on top of these waves.

The invention of the jet-ski solved the problem. Now surfers can get a ride with a jet-ski to the top of the wave and get a rush by riding the giant curler all the way to the bottom.

But should the wave break unevenly tow-in surfers face the danger of being hurled into sharp reefs or being held under tons of water in the case of a wipe out. 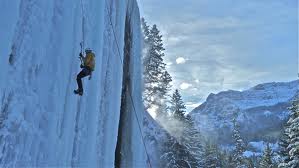 No more do climbers chip away steps in ice in order to ascend. They rely entirely on cramp-ons, which are toothy claws the climbers attach to their boots to gain a foothold on the ice.

To add to the thrill you have to climb fast or you may die of cold. 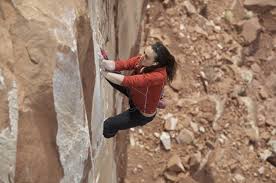 As if rock climbing is not a brow sweating, muscle numbing, impossible sport already, climbers decided that stuff like safety ropes, harnesses and other equipment was spoiling the adrenalin rush.

Why not support the full weight of your body with your toe tips and fingertips as you climb up sheer rock faces?
And so free solo climbing was born.

Make one little mistake and you will plunge to meet your maker. 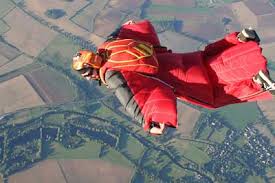 This is a weird one. It’s the art of skydiving without a parachute. Instead the jumper wears an odd-shaped suit that looks like an inflatable mattress. Actually the jumper does not dive or fall, as in sky diving, but rather glides to earth. For every one metre descended the jumper glides 2,5 metres.

This sport is so dangerous that only sky divers with 200 or more jumps to their credit are allowed to do it. 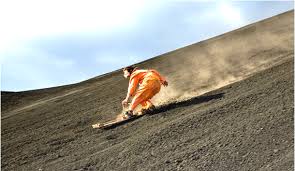 Not content with sea surf and sandy dunes, daring board freaks have turned to one of the least convivial places on earth: volcanoes. You climb to the top and slide down the side of the volcano on reinforced plywood boards, either sitting down or standing.

There is always the chance of hitting sharp volcanic rocks and getting cut to pieces. 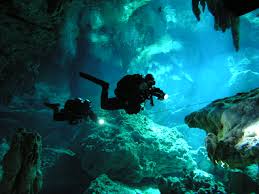 This is not an extreme sport for anyone who suffers from claustrophobia. Cave diving involves diving in pitch-dark underwater caves. If your equipment goes then so do you.

The water currents in underwater caves are fickle, and even with underwater lights visibility is an issue as sediment gets stirred up and spoils the view. 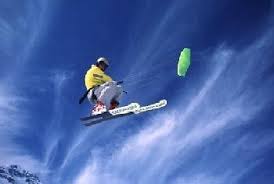 To save themselves the trouble of climbing a mountain, extreme skiers have invented kite skiing. A sort of kite that looks something like a parachute pulls the skier in a harness along the snow and into the air.

This is great when conditions are perfect, namely in wide open spaces, but when skiers combine kite skiing with going downhill on snowy slopes, the sport becomes, well, extremely dangerous. 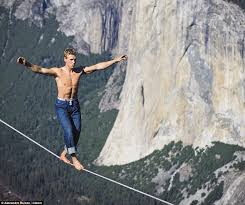 Think tightrope walking over vast heights and deep caverns. Now think of walking a slack rope, not a tight one, while using no balancing pole and no safety net.

There you have an extreme sport called highlining, which could easily have you flatlining.

It is untrue to say that no life insurance company will insure your life if you do any of these sports. Pay them R1,2 million and they will be happy to pay out R1,3 million if you lose your life to the adrenalin rush.